PRA – Progressive Retinal Atrophy
PRA is an inherited disease that causes blindness in dogs. Breeds seen most commonly at Animal Eye Care with PRA are Labradors, Poodles, Cocker Spaniels and Australian Cattle Dogs. Most other breeds have been reported to have PRA. Crosses can also be affected with PRA. Cats are also prone to PRA, and is seen most commonly seen in Siamese and Abyssinians.

There are 2 main types of PRA.
Young age onset. This is seen most commonly in the Collie and Irish Setter. Affected dogs show night blindness by 18 months of age and are blind by 36 months of age. The most common form of PRA is the late onset form. These dogs classically show night blindness around 5 years of age and are then blind by 8 years of age. At Animal Eye Care the late onset form of PRA is by far the most commonly seen form.

Caption: A severe PRA case. Note the loss of blood vessels
and the smaller and darker, circular optic disc at the bottom
of the green. Note the increased shiny reflection from the green layer.

Clinical Signs of PRADogs affected with Progressive Retinal Atrophy may initially show signs of night blindness. These dogs may be reluctant to go out at night, will only go out at night when the light is turned on, walk into things at night, or are noticed to have increased green or yellow reflection coming out of the eyes at night.

With time the cones, the retina cells used for day vision begin to be affected. These dogs will walk into things at all times of the day and night. Remember that some dogs cope extremely well with slow vision loss.

These dogs adapt and learn their environments, they are only noted to be blind when the environment has changed eg in a boarding kennel, or away at the beach house. In some cases the vision loss is overlooked as the dogs cope so well, problems are only noted when the affected dog develops cataracts. These dogs have cloudiness in the pupil.

PRA is an inherited trait
It is autosomal recessive in most breeds. This means that dogs can carry the gene but not be affected, but can pass on this trait to their progeny. DNA testing can be done on blood or saliva at any age to detect whether a dog will be affected, a carrier or genetically clear of PRA. lab This Labrador has cataracts secondary to PRA.

Treatment for PRAThere is no treatment for PRA. Some have suggested using anti-oxidants but there are no studies to show that this is of benefit. Prevention is the only way to deal with PRA. Affected dogs, their parents and their progeny should not be bred from. Annual eye testing with the ACES – Australian Canine Eye Scheme should be done in breeds prone to PRA. 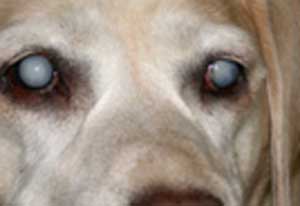 Caption: This Labrador has cataracts secondary to PRA.

Sequelae to PRANearly all dogs with PRA will end up developing cataracts (refer to above image). There is little benefit in removing these cataracts as any improvement in vision is only temporary. It is important that when cataracts developed that the eye is closely watch for redness on the top if the eyeball. Any redness on the top of the eyeball might suggest reaction by the body against the cataract. In these cases it is important to seek veterinary advice. This reaction needs to be treated otherwise severe pain can develop inside these blind eyes. 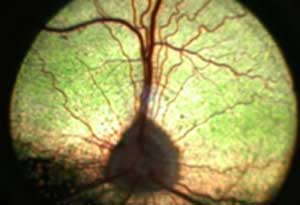 Caption: A severe PRA case. Note the loss of blood vessels
and the smaller and darker, circular optic disc at the bottom
of the green. Note the increased shiny reflection from the green layer.