The normal lens is suspended in the eye by zonules (see picture). The zonules can degenerate and the lens can become loose for a variety of reasons, especially after uveitis (inflammation in the eye) or glaucoma (if the eye becomes enlarged), but the most common form of lens luxation is a primary, inherited condition.

The zonules in these dogs are never normal and degenerate over time. Eventually the lens breaks free and is loose in the eye. This usually occurs at 4-7 years of age.
Image borrowed from: Manual of Small Animal Ophthalmology - British Small Animal Veterinary Association. 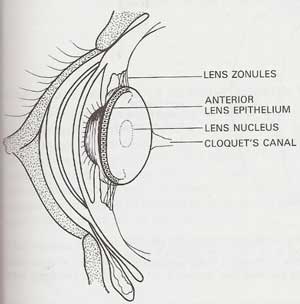 The lens can either fall forwards or backwards. If the lens is loose it can cause secondary glaucoma or uveitis, causing pain and vision loss. One lens usually loosens before the other but both are equally affected and both will eventually luxate. The only treatment for a loose lens is surgically removed however this is a very invasive procedure and carries a long term success rate of less than 50%.

A genetic test has recently been developed by the Animal Health Trust in the UK jointly with the University of Missouri in the USA. They discovered that the ADAMTS17 gene of chromosome 3 has a truncating mutation causing the abnormal zonular protein.

Most of the above dog breeds have a large number of dogs carrying the gene so the advice at the moment is to screen the breeding dogs so it is known if they are homozygous affected, heterozygous affected or homozygous clear. Not breeding any affected dogs or carriers would have a deleterious effect on the gene pool in these breeds by cutting out a large number of dogs. If the genetic status is known we can continue to use all dogs at stud PROVIDING all carriers and homozygous affected dogs are only put to clear dogs. This way we would only produce carriers (with a smaller chance of getting the disease). By then testing the next generation, knowing their genetic status, and breeding carriers only to clears we can quickly reduce the incidence of this distressing disease and eventually the incidence of the gene.

This test only needs to be done once before considering breeding and the genetic status of both parents should be known before mating.

Homozygous affected dogs should be checked every 6 months from 12 months of age, by a veterinary ophthalmologist, to monitor the stability of the lenses. A better success rate for surgery (up to 75%) is obtained by performing small incision cataract type surgery before the zonules start to break completely rather than large incision lens removal once the lens has loosened completely.