Enucleation is a procedure commonly performed in general practice. It is the policy of Animal Eye Care to refer all routine enucleations back to the referring vet if possible. The indications for enucleation are blind or painful eyes to improve the quality of life for that animal. It is not a technically difficult surgery but there are some tricks to make it go more smoothly.

Transpalpebral enucleation: this is probably the most usual way an eye is removed in practice. It allows removal of the eye within the containment of the conjunctival sac anteriorly and therefore is most applicable in cases where there is infection or neoplasia present. The eyelids are sutured closed and the skin incision made close to the eyelid margins. There is then a subcutaneous dissection down to the conjunctiva, then caudally around the back of the globe. Unless it is desired to remove orbital contents, the dissection should remain close to the globe to retain as much orbital tissue as possible to decrease post operative sinking of the orbit. The optic nerve is usually severed blindly then the globe may be removed. It is not usual to have to clamp or ligate the optic nerve. If there is an ocular tumour the blood supply to the globe may be increased and individual bleeding vessels may need to be clamped. If there is significant seepage the orbit may be packed with gauze swabs and tamponaded for 5 minutes (by the clock!). If there is still seepage then this should be repeated. Care should be taken to remove all the gauze swabs after this procedure. An orbital prosthesis may be placed to reduce the cosmetic effect of orbital sinking. The skin should be closed in at least a 2 layer closure which should be watertight as the orbit will fill with blood and this needs to be enclosed and tamponaded by the sutures line.

Transconjunctival enucleation: this method allows better visualisation of the eyeball and more careful dissection. A lateral canthotomy should be performed if required for access. The conjunctiva is incised 2-3mm back from the limbus 360 degrees and dissection is continued caudally. The extraocular muscles can be identified and cut at their insertions. The optic nerve is severed blindly and the globe lifted out. The third eyelid and remaining conjunctiva is then removed along with 2-3 mm of lid margin. The skin is closed in a 2 layer closure as before. This technique usually creates less bleeding than the transpalpebral method as there is minimal bleeding until the optic nerve is severed and this can immediately be stopped.

WARNINGS!
Cats have very short optic nerves before they fuse at the optic chiasm. Undue traction on one optic nerve can also pull on the other causing contralateral blindness. This has been well reported as a complication of feline enucleation and is especially easy to do if the globe is enlarged eg with glaucoma. The owner should be warned and if required the globe collapsed via needle aspiration at surgery to decrease the risk of pulling too hard to get access. A transconjunctival approach is preferred in cats as it allows better visualisation and you can watch to check if the globe appears under tension.

ALWAYS do a generous lateral canthotomy to give better access. We consider removal of a buphthalmic feline eye to be a referral procedure due to the increased risk to the second eye.

Rabbits have a large venous plexus deep in the orbit. They can bleed out from this so avoid rummaging deep in the orbit. They have a ventromedial Harderian gland- a large lobulated glandular structure. Although the third eyelid and its nictitans gland need to be removed the Harderian gland may be left in situ as this also will bleed profusely if disturbed. Enucleation for intraocular disease carries a good prognosis. Enucleation for orbital abscesses carries a guarded prognosis as removal of the abscesses is often impossible. Any underlying dental disease should always be considered and managed.

Top Tips
Consider buying a pair of blunt/blunt curved enucleation scissors (see picture). We have a pair with almost a 90 degree curve and they are great for allowing the dissection to track round the globe, almost eliminating any traction on the eyeball as we seek to blindly transect the optic nerve. 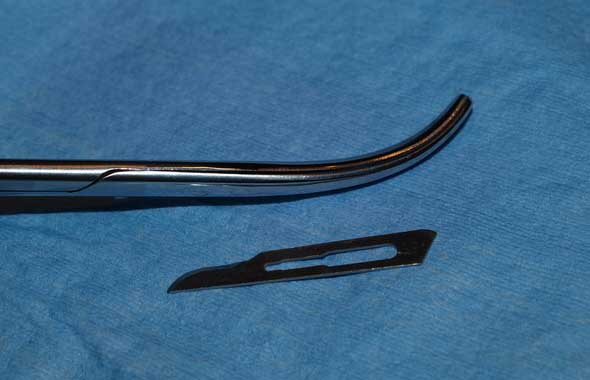 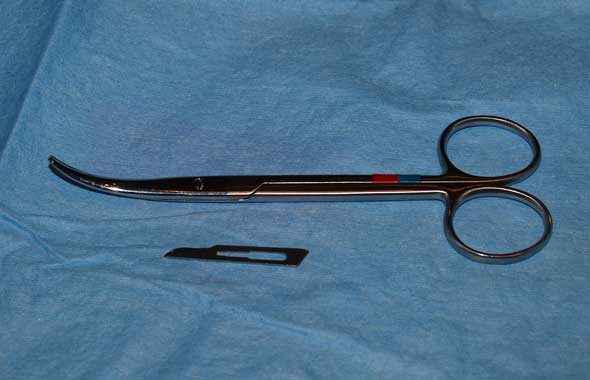 Unless it is an enucleation due to known trauma/ ulcer perforation then any removed globe should be submitted for histology. That uveitis/ glaucoma diagnosis may be due to underlying neoplasia and the eye can act as a marker for systemic disease. We recommend Dr Christina McCowan for globe pathology. She may be accessed via ASAP Labs or via the Vet School Pathology Dept at Werribee. She has a special interest in eye pathology and will give a much better “read” of the eye than a general pathologist as ocular pathology often does not follow general pathology rules.